The most stresstive time of the year?

Wrapping presents, the big December food shop, and losing gift receipts have been named among the most stressful things about Christmas.

A poll of 2,000 people revealed almost half of Christmas-celebrating adults dread the festive period, with buying meaningful gifts the trickiest thing about the season.

Pleasing everyone and cooking dinner for the family is considered stressful for one in five adults, while putting up decorations, keeping presents hidden and a lack of exercise also feature on the list.

And tensions are at their highest in the third week of December.

However, two thirds (66 per cent) said that the festive stress was worth it in the end – and 44 per cent even said Christmas day itself was the happiest day of the year.

Simon Thompson, managing director of Warner Leisure Hotels, which commissioned the research, said: “Christmas is a magical time, but a lot of festive admin is required to bring it to life.

“We absolutely understand the pressures and find we get a lot of last-minute bookings for our festive and January breaks because people are so keen to unwind - before and after.

“We hope people remember to take some time for themselves at some point during the festivities.”

The study also found that one in 10 respondents felt organising Christmas was more stressful than moving house – while 21 per cent thought sorting out finances was easier.

For 34 per cent, the amount of money they will spend over Christmas was the biggest worry.

And nearly a quarter (23 per cent) cited putting on weight with endless boxes of chocolate and festive meals as one of their biggest stressors.

Despite all the hassle, just under a fifth admitted they will secretly enjoy all the chaos of the Christmas build-up.

To beat the festive rush, nearly half of respondents said they start planning their December 25th ‘way in advance’, with one in 10 even beginning their preparations in the summer.

But the majority will start planning the big day in the first week of November, according to the OnePoll research.

Despite the careful planning, Brits will forget an average of two key elements – with some forgetting as many as 10.

More than one in 10 (13 per cent) will forget to bring in extra chairs so everyone can sit own, while one in five won’t remember wrapping paper.

Another 28 per cent will forget to post out Christmas cards until it’s too late, leading to a scramble to hand-deliver them.

Simon Thompson added: “It’s all worthwhile in the end. We suspect many people wouldn’t have it any other way – and being able to relax at the end of the day with a glass of sherry, knowing all the work is done, is a wonderful feeling.”

THE TOP 25 BIGGEST STRESSES AT CHRISTMAS:

For any more information or imagery please email warnerpressoffice@bourne-leisure.co.uk and warner@wpragency.co.uk

Warner Leisure Hotels, renowned for short breaks 'exclusively for adults' are set in some of the UK's finest historic countryside and coastal locations. From the picturesque Yorkshire Dales to the glistening Solent shores of the Isle of Wight; each hotel offers fine dining, lovely rooms, live entertainment, and plenty of areas to just relax and soak up the scenery. Guests can even try their hand at a new 'experience', or simply sit back, unwind. 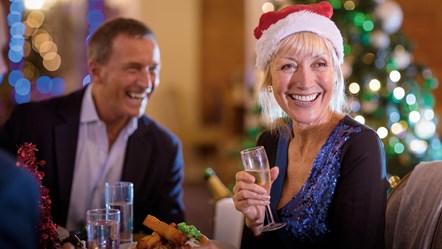